We don't need the banks: Why Zopa, RateSetter

As peer-to-peer lenders get the thumbs up from the Government, Robert Powell visits a recording studio that has benefitted from this new form of finance and if we still need banks… 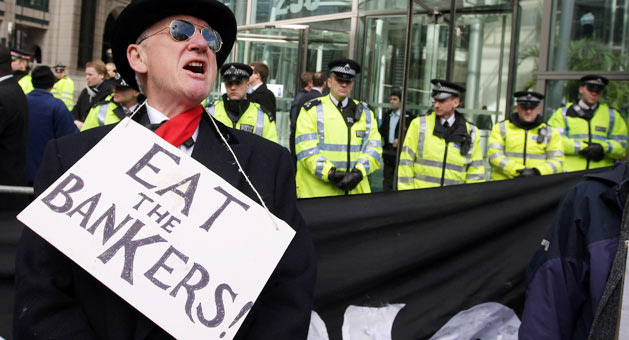 Bankers - we don't need them any more (Image © PA)
“One of the best pianos for jazz music in Europe,” is how Mark Thompson lovingly begins describing the contents of his North London recording studio. Housed on a quiet residential street in Haringey, Snap Studios has built its reputation on its use of vintage gear. But the financing method used by the business is anything but retro.

Around eight months ago, Thompson took out a loan through the peer-to-peer lender Funding Circle, to help grow the business overseas. An experienced businessman, he had always been loyal to one major high street bank – even forging a friendship with his bank manager, Ian. But now Ian had retired, and disillusionment with the modern, faceless world of banking led Thompson to try a new form of borrowing.

“I like the concept of feeling that human beings were investing in the business… It’s sharing the adventure with all and sundry, rather than just dealing with a faceless computer,” he said.

Funding Circle works by putting savers in touch with businesses who need a loan – credit checking the borrower fully along the way. It is one of a handful of new online money marketplaces bringing something of a human touch back to banking. Since its inception in August 2010, Funding Circle has financed over 650 loans worth more than £28 million to businesses.

James Meekings, co-founder and director of the lending site, said: “You get to support small businesses and really see what your money is doing. I think that gives a different appeal to the service that you can get through any other financial product.”

And the returns available to the saver aren’t bad either. Funding Circle currently offers a gross yield of 8.3%, minus 1% for fees. However lenders do have to factor in the risk of borrowers being unable to repay their loan.

The lending portal only allows established and creditworthy businesses to borrow. The companies that are accepted are also graded from A+, indicating a very low risk, to C, indicating an average risk. The estimated bad debt across these bands ranges from 0.6% for top ranked companies to 3.3% for the medium ranked ones. This allows lenders to manage the risk they take on.

Investors are also encouraged to ask questions and probe the businesses. This can serve to reaffirm their financial credibility and establish their business morals.

But Funding Circle isn’t the biggest fish in the peer-to-peer pond. That title goes to Zopa: an online marketplace that has arranged over £190 million of loans between individual members since 2005. Like Funding Circle, the site credit checks all borrowers and grades them according to risk.

Zopa’s chief executive Giles Andrews is also chair of the Peer-to-Peer Finance Association, a self-regulatory trade body comprising of his own business, Funding Circle and RateSetter.com. The association was set up to ensure high minimum standards across the industry and to lobby the political interests of the sector – one of which is to gain endorsement from, and eventually appropriate regulation by, the Government.

“Our businesses are all about building trust we’ve all been working hard to be as transparent as we can and doing what we can to promote trust. But obviously regulation would be a considerable help in that regard,” says Mr Andrews.

But so far all the peer-to-peer industry has got from the Government is an endorsement of their rules and codes of practice by the Department for Business, Innovation and Skills.

For Rhydian Lewis, chief executive of the peer-to-peer lender RateSetter.com, part of the explanation for this reticence on the part of the Government is the current fragile and rapidly changing financial climate.

But he also pointed out that this was not the only reason: “[The Government] seems to be keen to cut down on what they perceive as red-tape and are keen for businesses to grow and they may feel that at this stage – particularly with our self regulatory code in place – peer-to-peer has a good chance to grow outside of that.”

We don’t need the banks

So where next for peer-to-peer? Well, regulation or no regulation, the industry has certainly been boosted by a widespread feeling of disenchantment with the mainstream banking sector that is unlikely to fade fast.

As Funding Circle user Mark Thompson puts it: “It was quite nice to say to the bank: no thank you, we don’t need you. You may need us in the future, but we don’t need you just at the moment”.

As for who will need who several years down the line. Only time will tell.

[Related link: What you can earn using social savings]
No comments:

Red meat is good for you, I'd steak my life on it

A controversial view on 'bad' foods

Red meat ... is it really a no-go?
By JOANNA BLYTHMAN, Food writer

NUTRITION experts regularly warn us that fatty foods are bad for our health. But are they really?

While sausages, eggs, red meat and unskimmed milk have all been deemed potentially dangerous, award-winning food journalist and author Joanna Blythman believes that the opposite is true.

Here she says why.

FULL-FAT MILK (use daily): Blue-top cow’s milk usually contains around 3.7 to five per cent fat. Semi-skimmed and skimmed cow’s milk contains one to 1.5 per cent and 0.1 per cent fat respectively.

Unless you drink gallons, using lower-fat milk won’t make any great impact on your fat intake, and you’ll miss vitamins A, D, E and K skimmed off in the cream.

RED MEAT (eat two to three times a week): This provides protein to satisfy your appetite; B vitamins, which help brain function; iron, which helps prevent anaemia; and minerals, such as zinc and selenium that boost immunity and protect against cancer.

Government healthy-eating advice promotes poultry as it is lower in fat. But neither chicken nor turkey has the range of nutrients in red meat, and there’s no good evidence that fat in red meat is bad.

EGGS: (eat as many as you fancy): Eggs have been demonised because they contain cholesterol, which we’re told we should lower in our bodies. But cholesterol in egg yolks doesn’t affect the cholesterol levels in our blood. What’s more there’s no evidence that people who have high levels have worse health.

Actually, we need cholesterol for many physical processes, such as healing and making vitamin D.

NUTS (eat as many unsalted nuts as you like): People trying to lose weight have been told to avoid nuts because they are oily and clock up calories, but their mix of fat, protein and fibre means they keep blood sugar levels stable. Research suggests that eating them aids weight loss and stimulates the metabolism.

FULL-FAT YOGURT (eat daily): Being fermented, full-fat yoghurt contains live bacteria that are great for the gut and boost immunity.

There are lots of low-fat yogurt drinks that claim to be healthy, but often contain lots of sugar and/or sweeteners and additives. You’ll be healthier if you eat natural full-fat yogurt. Sweeten it with honey.

BUTTER (eat daily): Major studies have failed to find evidence that cutting your intake of natural saturated fats, such as butter, significantly reduces the risk of heart disease, cancer or weight gain. Butter is rich in short and medium-chain fatty acids that have anti-cancer properties.

Margarine and spreads are thoroughly unnatural and loaded with additives. We now know that old-style spreads with trans-fats caused heart disease. Why give the reformulated spreads a try?

SAUSAGES (eat fortnightly with lots of vegetables): Bangers make use of fatty cuts, but there is no good evidence to support the idea that saturated fat is harmful.

A main course of cheap, low-meat content sausages with heaps of stodgy mash potatoes and sugary ketchup, doesn’t have a lot to commend it nutritionally. But two sausages with a high meat content (65 per cent meat or more), with generous quantity of salads, cooked veg or beans and lentils, make a nutritious meal